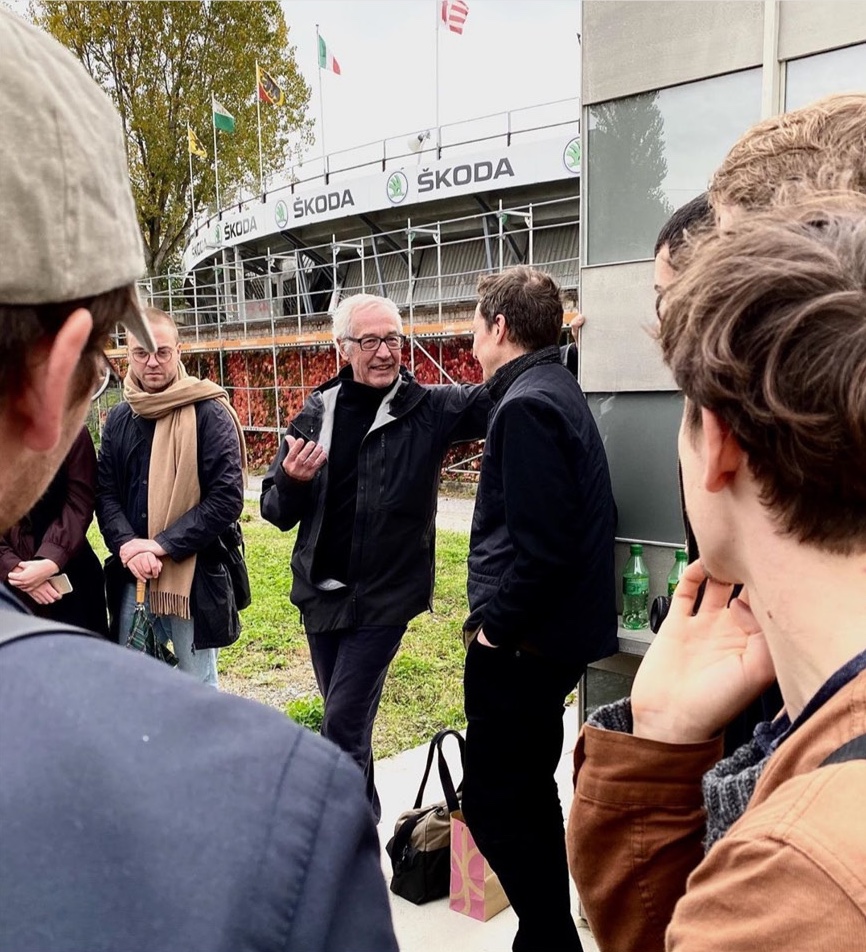 Today we had the chance to meet the artist Peter Fischli, next to his sculpture «Haus». This artwork was originally created for the exhibition Skulptur Projekte in Münster in 1987, with his long-time partner David Weiss. Together they looked at post-war buildings and thought: «What could be the best sculpture for a city?». Surely, it would have to be something that mirrors what is there: a house. But as Peter said: «It shouldn't be too ugly, otherwise it would be about ugliness. We looked for the high-end Mediocre.» The sculpture should not be seen as a building from an architect, but from a building company.

«Haus» is a sculpture which traveled quite a bit, starting its journey in Münster, then making its way to New York City, Mexico and at last, to the suburbs of Zürich. After some reflection on the next location of the work in their home city, Peter Fischli and David Weiss chose to place it in Oerlikon, near the velodrome. The mediocre architecture of the «Haus» mirrors the one of the surrounding buildings. The topography of the place allows different points of view on the «Haus». As Peter put it: «With the topography, you can see it from high up. If you go down, it is like the Acropolis». Unlike the situation in Münster, (were it was placed inbetween houses, next to a sausage shop) the sculpture stands alone on the meadow, without direct connection to other buildings and their users. This location was carefully chosen so that it wouldn't be a memorial of what the city was. As we left the site looking at the two bottles of soda, we could not help but think of the people eating their curry wurst on it's original location leaned on the sculpture, making this piece of art their own.

We had the chance to see «The point of least resistance» from Fischli Weiss, a film of 29 minutes, which was the first work of the two swiss artists in 1981, presented in the Arthouse Piccadilly. «When we did this movie, we tried to give a counter voice to conceptual art.»

Longtang is a think tank for contemporary art that was founded by Anne Gruber, Emil Michael Klein, Ludovica Parenti and Tobias Kasper at the beginning of 2018. Located between residential and industrial areas, Longtang is a meeting space, exhibition space, curatorial project, mediation/thinking space, studio and work space for the founders, studio and work space for changing guests. Inside of the Longtang, the current installation «Too Late to Read», entitled Newsfloor, creates a verbal and visual interference, as the floor is covered with pages of the Neue Zürcher Zeitung. The intervention seems like an unfinished space. The artist Claire Fontaine refers to the crisis of the print media and the dwindling freedom of expression that is no longer a matter of course. The seven text pile sculptures also function as paintings that gradually disappear.

Today we had the chance to visit Max Bill's house, built in Zumikon in 1967/68. Born in 1908, the architect, artist, graphic artist and more joined the Bauhaus between 1927 and 1929 and kept the school's modernist ideology during all his life. In 1953 he created «Die Hochschule fur Gestaltung» in Ulm with Inge Aicher-Scholl and Oti Aicher. It is considered one of the most important design university after the Bauhaus. Internationally, it enjoyed an excellent reputation, also because of its amount of foreign teachers and students. Also, the professionalisation of the students was well known, which was not the case with the Bauhaus. In 1964, he was the chief of the «Éduquer et créer» (Educate and create) Section of the National Exhibition in Lausanne, where he built the Vidy Theater the same year. Politically left wing oriented, Max bill engaged himself in the Landesring der Unabhängigen (The Alliance of Independents) at the Swiss nation chamber between 1968 to 1972. He wanted to create a lobby for a cultural subject in Zürich but he didn't succeed. About his constant interest to promote culture and art for all, a large Keith Haring's painting is hanging in his office. Max Bill originally wanted to hang it up in the Zumikon's Primary School. He saw in it a pedagogical way to guide the children to get an interest in art.

«It's difficult to imagine free information, not entangled in a kind of utilitarian or political context, such as being commodity or being stuff that politicians use to win people for their highly problematic agendas. So maybe when information is freed from those, not owned by anyone in particular, dealt with by people who do not form, do not represent a uniform lobby or group of interest that use this information for some clear purpose, then it becomes somehow maybe freed again, it can be looked at as information. For instance the research that the artist Maria Eichhorn conducted as part of her work for Documenta 14 was putting a very interesting comment to the fact that the Gurlitt estate was absent in Documenta. She researched on a number of books from one library in Berlin, which are clearly coming from Jewish private libraries, and she just brought them in the center of the room like a sort of monument. And of course you could say that this could just be printed in a newspaper as an article, but there is something else about the gesture of bringing it to visibility in an exhibition like this, than having it as just potential information in the media. The space of the art is somehow freer than some other spaces that are available today, especially as a space to make things visible!»

«What happened to us is a pocket size art history.» In the morning of the last day, we visited Parkett, a gallery and a magazine publisher. The magazine Parkett, started in 1984 and was published until 2017. The pair, Jacqueline Burckhardt and Bice Curige, visualised Parkett to be something accessible - Parkett being a word that can be pronounced in German or French, meaning a strong, stable base. The artist commissioned to do the interior walls paid homage to the history of the space through the delineation of picture frames from the previous collections. Curiger commented on how they wanted to move away from the original «boring» rectilinear and monochromatic look of the space, opting for free-form tables propped up by economic cardboard tubes. The determination to deviate away from «boring», traditional structures also extended to their magazine publication of Parkett: Curgier said that stopping at the 100th publication was too boring and that the number 101 was preferred because it was palindromic and had «energy on both sides». The graphic design of the magazine and typography was also intended to capture a dynamic, airy feel of a triangular flag, further emphasising their intuitive nature.

For our last afternoon we went to meet Christoph and Teo Schifferli in ARCHIV. According to its members, ARCHIV is «the playground of a few addicted collectors, enjoying remarkable or unusual publications, ephemera, photographs and facts relating to one or all of these». With great enthusiasm, Christoph showed us his little collection of architectural books from the seventies, belonging to a larger collection of art books he has been widening for more than almost thirty years. This presentation oriented the discussion towards the role of the book in architecture, as Kurokawa's book «Capsule» could really be considered as the project per se. We also discussed on the evolution of printing methods in the XXth century, in Europe and in Japan, in the context of the book and the press industry. In addition to that, Christoph had prepared many other art books on the tables. Most of them, such as Christopher Williams' «The production line of happiness» book(s), which ironically deal with the relationship between image, text and context, or Stanley Brown's obsessive minimalistic books, published by different galleries and related to his works about distances. Although some of these books were clearly post-modern, we couldn't really find in this collection of rather recent books the modern books that would have allowed a comparison, although there was a tension between the modernity of the graphic design, and the post-modernity of the book content. We were all stunned by Christopher's (almost unreasonable) passion for such a collection, containing projects and being itself a huge project, of which we had the chance to get an insight.

In Wiedikon we met the «Ma» part of Karma (Marina Olsen) at their gallery called Karma International. Their current exhibition shows six young artists who deal with highly contemporary issues. From a young transgender artist who displays a series of drawings and collages about the ambiguous perception of her body, to a video piece about the everyday routine in a brothel with sex-dolls, to paintings by a tattoo artist based in New York.

In the exhibition a wide range of current political and social issues were tackled. Even though the art works are highly personal, they speak for our society and time. The wish of the curator was to give a voice to speakers who deal with themes of today and create another relationship to history. This liaison clearly differs from the one of Parkett, it's not about watching from above and selecting things and themes, but more about diving entirely into the present - and maybe not wanting to get out anymore.